The golf phrases bogey, par, birdie, eagle, and albatross have a long history.

Bogey and par were crucial in the evolution of handicapping.pioneered by the LGUThree of the words, bogey, birdie, and eagle, have contemporary meanings due to their usage in the United States.

“Bogey” was the first stroke system, developed in England at the end of the 19th Century. The whole history is provided inRobert Browning’s History of Golf 1955.

Mr Hugh Rotherham, Secretary of the Coventry Golf Club, came up with the notion of standardizing the number of strokes a competent golfer should take at each hole, which he named the ‘ground score,’ in 1890. 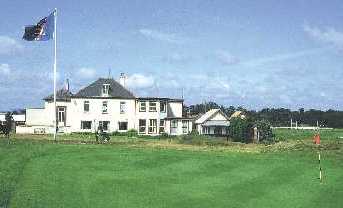 Dr Browne, Secretary of the Great Yarmouth Club, took up the concept and, with the approval of the club’s players, established this type of competition for use in match play. During one tournament Mr CA Wellman (perhaps Major Charles Wellman) screamed to Dr Browne that, “This player of yours is a real Bogey man”. This was most likely an allusion to the titular theme of the famous Edwardian music hall ballad “Hush! Hush! Hush! Here Comes the Bogey Man” at the time. As a result, the ground score became known as the bogey score in Yarmouth and elsewhere.

A ‘bogle’ was a Scottish goblin as far back as the 16th Century and a Bogey-man was a widely used term for a goblin or devil. When measured against the bogey score, golfers at the time thought they were playing Mister Bogey. This paved the way for bogey contests, often known as handicap competitions or stablefords.

On 2nd January 1892, The Field reported that ‘a novelty was introduced in the shape of a bogey tournament for a prize. … Fourteen couples began, but the monster vanquished all of them.’

In 1892, Colonel Seely-Vidal, the Hon Secretary of the United Servic es Club at Gosport, also worked out the ‘bogey’ for his course. The United Club was a military service club, and all members had a military rank. They could not measure themselves against a ‘Mister’ Bogey or have him as a member, so ‘he’ was given the honorary rank of Colonel. As a result, the moniker “Colonel Bogey” was coined.

Later, around the middle of the twentieth century, bogey was used to refer to someone who was over par.

The word par is taken from the stock market phrase indicating that a stock might be above or below its typical or ‘par’ value. In 1870, Mr AH Doleman, a golf writer, asked the golf professionals David Strath and James Anderson, what score would win ‘The Belt’, then the winning trophy for ‘The Open’, at Prestwick, where it was first held annually from 1861 to 1870. According to Strath and Anderson, flawless play should result in a score of 49 for Prestwick’s twelve holes. Mr. Doleman referred to this as “par” for Prestwick, and Young Tom Morris won with a score of two strokes “over par” for the three rounds of 36 holes.

Although the first noted use of the word “par” in golf was in Britain and predates the  bogey, today’s rating system does not and the par standard was not further developed until later. It had been theLadies Golf Association, which started developing a nationwide handicapping system for women in 1893.. By the end of the century, it was mostly in place. The Men’s association, created in 1894, followed suit a few year’s later.

The United States Golf Association (Men) at the time established the following fairly contemporary lengths for establishing par in 1911:

As golf developed, scores were coming down, but many old British courses did not adjust their courses or their bogey scores, which meant good golfers and all the professionals were achieving lower than a bogey score. This meant that the United States had a current national standard for hole lengths, but the British bogey rates were chosen by each club and were no longer acceptable for professionals. To the consternation of the British, the Americans started referring to one over par as a bogey.

By 1914, British golf periodicals were advocating for a ratings system similar to that used in the United States. However the Great War 1914-18 intervened and it was not until 1925 that a Golf Unions’ Joint Advisory Committee of the British Isles was formed to assign Standard Scratch Scores (SSS), to golf courses in Great Britain and Ireland. This group is currently known as the Council of National Golf Unions (CONGU). The Golf Unions of each nation (rather than the Royal and Ancient) set pars and handicaps.

“Birdie”, meaning a score of one stroke under Par, comes from the early 20th century American slang term “bird”, meaning anything excellent. In the September 1911 issue of Maclean Magazine, a golf shot was characterized as a “bird” straight down the course, around 225 yards.

The Country Club in Atlantic City is credited with coining the term “birdie,” according to the USGA website. A B Smith was interviewed by the US greenkeepers’ magazine in 1962. He recounted that, in 1898/9, he and his brother, William P Smith, and their friend, George A Crump, who later built Pine Valley, were playing the par-four second hole at Atlantic City, when Ab Smith’s second shot went within inches of the hole. Smith commented, “That was a bird of shot,” and believed he deserved to win with one under par, which was agreed upon. He promptly holed his putt to win with one under par, and the three of them referred to such a score as a “birdie” from then on. The event was held in 1903, according to the Atlantic City Club. 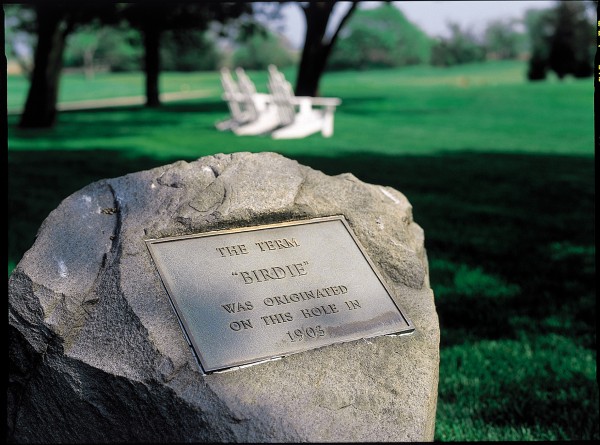 By 1913, the word had crossed the Atlantic, and Bernard Darwin, writing on a trip to the United States in the September 1913 issue of Country Life, remarked

“It takes a day or two for an English observer to realize that… a ‘birdie’ is a hole completed in one stroke under par.” 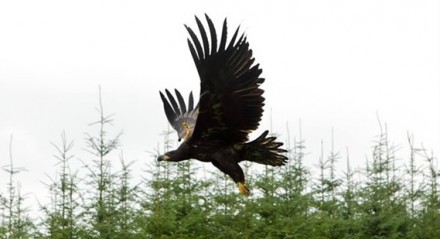 “Eagle,” defined as a score of two under par for a certain hole, was obviously an extension of the motif of birds for excellent scores from a “birdie“. It would be natural for American golfers to think of the eagle, which is their national emblem and the phrase appears to have arisen very soon after the ‘birdie’.

Ab Smith (see Birdie above) said that two under were referred to as a ‘eagle’ by his group.

By 1919, the word had been introduced to the United Kingdom, as when Mr. H D Gaunt described the usage of‘birdie’ and ‘eagle’ that he met in Canada. For many years, eagle was always introduced as American terms, as in 1922 whenCecil (Cecilia) Leitchdescribed a putt for a 3 on a par-5 hole as ‘securing what is known in American golfing parlance as an “eagle”‘ (Page 202 of Golf XII, 1922).

Albatross is the term for three under par and is a continuation of the birdie and eagle theme, but is in fact a British term. According to Ab Smith, his gang adopted the term “double eagle” for three under (see Birdie above), which is still the phrase used by most Americans as well as the name for theirDouble Eagle Club (membership by invitation only).

Three under par is a very rare score and an albatross is a very rare bird. The precise origin is unknown, howeverfirst known reference in 1929indicates that it had been in use for some time before then. John G Ridland received an‘albatross’ in India in 1934, argued that the advent of steel shafted clubs in the 1920s made this score widespread enough to warrant a name. 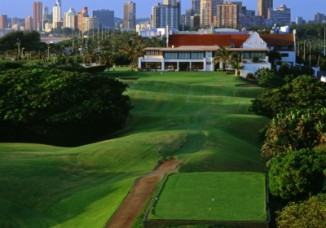 The 18th hole at Durban Country Club was the scene of the first recorded albatross, a hole-in-one on a 271-yard par-4.

The first ‘albatross’ score reported as such in the press is from South Africa when E E Wooler scored a hole-in-one in the summer of 1931 on the 18th hole of the Durban Country Club which is a par-4. It cost £40 in drinks, but he wouldn’t have cared if he knew he was creating history.

More information about the earliest albatrosses may be found inThe Albatross has Landed in News section.

The Whaup and Double Bogeys

There are no standard words for 2 or 3 or more above Par. It’s simply double and triple Bogeys. Anything beyond 7, 8, or 9 will be a ‘Blow-up’ or a ‘Disaster,’ depending on your skill level.

Joyce WetheredIt was previously proposed that a hole-in-one be dubbed a Curlew, also known as a ‘Whaup’ in Scottish, which, although suitable, did not take on.

It seems that golfing terms came into popular use in much the same way as you find new words being invented and used on the Internet. People start utilizing them if they sound nice. We don’t hear about all of the phrases, such asbeantops, which never made it because they were not noticed. Only the future can tell which of the terms that we create will still be in use in a hundred years time.

how to watch liv golf tour

How Long Should You Wait After Regripping Golf Clubs?

Gear Questions You’re Afraid to Ask: How many wedges should I carry?

How Do I Use a Golf Laser Rangefinder, Anyhow? – TecTecTec USA